Let’s just get the bad news out there right up front: the Mississippi Blues Marathon was a death march. Four hours forty-three minutes and fifty-nine seconds of “creeping like snail unwillingly” to the finish line (apologies to Shakespeare). More than four and half hours of heat, humidity, and hills. Nearly five hours of asking myself, “what the hell was I thinking when I signed up for this race?”

So, what exactly were you thinking?

And, well, Melissa was going, too, so what else could I do?

So, since you brought it up, what exactly went wrong?

I’m so glad you asked! It’s pretty simple: heat, hills, and humidity! Oh, have I used that one before? Then I’d have to go with nutrition, nutrition, and nutrition.

Honestly, you’d think this was my first marathon, not my forty-third. Criminy. After developing a nutrition plan that worked for, oh, say, about forty-two marathons, for reasons I’ll never fathom, I completely threw that plan out the window. Blame it on the holidays. Blame it on the new year. Blame it on the humidity. Blame it on Rio. Whatever. I just blew it. On the day before the marathon, I had breakfast for dinner, salad for lunch, and an airport bagel way too early in the morning….then forgot completely about making sure I had the right supplies on race morning. I woke up with a sour stomach on race morning (see: previous day’s food), and then realized that all I had to calm it was a bagel (no cream cheese, no butter, no PB, no nothing) so stale that I could choke down only about half of it. I hadn’t made the extra effort to get my normal OJ, so I tried making do with some mango juice that ended up being too thick for my tastes. And finally, I normally eat a bit more – a small muffin or some other small pastry – to top off my fuel. But I had forgotten entirely, so I went to the race starting line with about half the normal amount of calories.

With a gnarly stomach to start out with, and with hot and humid conditions, it was almost a pre-ordained outcome when I lined up at the starting line. I ran; I drank water at the aid stations; I sweated like crazy; I took a couple of gels; then my stomach decided it had had enough. About the time I most needed some additional calories, I just couldn’t choke down another gel. The thought of Gatorade turned my stomach about as much as the thought of more gels, so I just kept drinking plain water and popping endurolytes. And so, I bonked.

It wasn’t pretty, but I finished. Dead woman walking.

Enough with the complaining already. Didn’t your mother teach you that rule about “if you can’t say something nice, then don’t say anything at all”?

Okay, okay. You want something nice, let me try.

I’d like to say that the course was beautiful and scenic, and that we passed grand old antebellum mansions along the way, surrounded by sturdy ancient oak trees dripping with Spanish moss. Alas, that would make me a writer of fiction, not a mere race reporter, as that’s just not the lay of the land in Jackson.

But we did run past the old Capitol building, and within a stone’s throw or so of the current Capitol. We ran through a cross-section of the small city: through some commercial areas, through the old downtown area, past the fairgrounds, along a scenic parkway, and through some pretty residential areas. One section of the race took us on a funky out-and-back on a road that led out of town towards the airport. Although many of the streets were old with badly cracked and pitted asphalt, we did have plenty of real estate for running – always at least a full lane to ourselves, along with good protection provided by ubiquitous orange cones and good volunteer and police presence.

That’s it? That’s all you got? You went to Mississippi and all you got is lousy orange cones?

Hold on, hold on, I’m not done yet. I haven’t had time to tell you yet about the volunteers – those angels of mercy! I know it’s a cliché to thank the volunteers, but we’re talking the deep South here. The cradle of good manners. The true home of Southern Hospitality. And the volunteers here – there seemed to be about a thousand or so of them – were universally polite, supportive and friendly. They started early with the usual lies “you’re looking good” and such other utter nonsense. But they all said it with such huge smiles that it was impossible not to believe it – or at least to try to look like you believed it. Over and over and over again, volunteers said, “thank you for running in Mississippi!” And I believe they meant it.

Well, there were about a gazillion fifty-staters and Marathon Maniacs out there. The place was crawling with them. Melissa and I went to the 50 state reunion at the expo, and got to meet lots of folks there, including Larry Macon, who just last year set the world record for the most marathons run in a single year. (And it turns out he’s an extremely nice guy who doesn’t seem at all like an alien.) Before the race got started, we had a photo parade with other 50 staters and maniacs. Along the course, you couldn’t spit without hitting a 50 stater or maniac. Around miles 8-10, I ran for a while with a 50 stater who was running his 42nd state – an Irishman who lives in St. Louis. Those miles melted away. Then around mile 14, I fell into stride with Bill, another 50 stater from Columbia, Missouri. In one of those great small-world episodes, we discovered that Bill and his wife are good friends with my sister’s ex-in-laws – people who seem like family to me. Bill and I ended up running together for about the next 7 miles or so, and those miles, too, just melted away.

But I’m saving the best story for last. I had studied the race map enough to know that we had an out-and-back somewhere around the halfway point. I had not studied the map well enough to know that the half marathoners (who started with us, and shared the race course with us for most of the first half) would have a different out-and-back section. So when I started to see runners returning on the other side of the road around mile 11, I thought this was our big out-and-back, and I started looking for Melissa. Instead, I recognized a woman who had passed me back around mile 5 or 6; she was tall and lean and was wearing black tights and a long-sleeved blue top. (Why anyone would wear tights and/or long sleeves in this heat and humidity was way beyond my imagination.) Thinking that the out-and-back was around 3 miles each way, when I saw Black Tights, I thought “No Way! – she couldn’t have gained that much on me since she passed me!” Then while I worked through my outrage in my head (She’s clearly not in my age group, so who really cares, anyway? If somebody wants to cheat, what of it?), I started to see the notices for the half marathoners to turn around just ahead. Aha! Black Tights was a half marathoner! It made perfect sense. And it explained why I hadn’t seen Melissa.

So in another block or two, the half marathoners did a u-turn, and the marathon field continued straight ahead. The field was suddenly very small. We crossed I-55 that runs north-south through Jackson, and made a turn onto a frontage road. I thought I heard someone yell my name, but figured I was just “hearing things”. Then I heard it again – and this time I was sure I heard it “Judy Denver!” I stopped in my tracks and turned around to see Melissa running toward me. What the heck?!? She yelled out a quick explanation – she had made the half-marathon turn by mistake and was just getting back on course – and then she was gone in a blur. I would not see her again until the finish line, where she had finished much earlier than me, despite having run several extra miles.

But what of this Blues thing? Why is the thing called the Mississippi Blues Marathon? Surely not just because of your sad experience there?

Come to think of it, maybe it was only fitting that I had a death march in Mississippi. How else could the blues resonate so completely?
Posted by Judy Denver at 1:15 PM 1 comment: 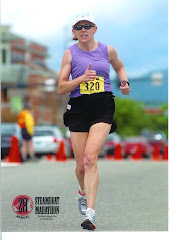